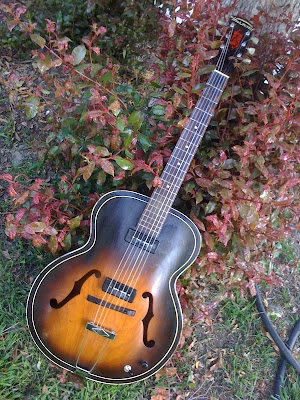 A just-finished project for Joel Shearer. A 50s or 60s (let's just call it old) Harmony arch top acoustic 'lectrified with a pair of 1962 (!!) P-90 pickups. Neck reset, new tuners, Gibson-style tailpiece, single volume control and three-way toggle.
These Harmony guitars are of special interest to me as it was really the first, or first kind of, guitar I ever wanted. One of my high school teachers, let's protect her identity and call her Twinkle Quesenbury, had practically an identical instrument. Thousands and thousands were manufactured so not too difficult to imagine. I coveted Ms. Quesenbury's Harmony guitar.
Twinkle was my first "cool" teacher. (The crown for greatest "cool" teacher of my youth belongs to Michael Matros, English teacher at the North Carolina School for Science and Mathematics. Matros once told me that the unrequited guitar of his youth was a Gretsch Country Gentleman so I'm sure Matros will be worked in to a future post.) After delivering a lesson, Twinkle would talk about music and art, literature and cinema. This interval between the end of the lesson and the bell was called Twinkle Time. Actually, it was called something else that would alliterate with 'time' but we're protecting her identity here. And before you get too worked up into a lather, there was no hanky panky. Just some booze adventures and Twinkle might currently be teaching second grade somewhere. Who knows.
Anyway, this is rural Western North Carolina. It's the 80s and it's wintertime. Not much is happening. Twinkle would often have students over to her house to hang out and play music. This was about the same time I got my first guitar, a Washburn acoustic. Now that I think about it, Twinkle was a little stingy with her booze and never offered me any of that jug Gallo. The gatherings were great fun and I was learning my first chords and, more importantly, learning why folks get together to play music. I have a vivid memory of being taught the chords for "Stray Cat Strut." Good times.
Twinkle weighed about 95 pounds and it didn't take much of that Gallo, discreetly sipped from a Solo cup, to get her tipsy. After one shambolic evening of chord progressions with some friends, including fellow photographer Kai McBride, Twinkle decided she would save my parents a trip and insisted upon driving me home. -Pretty sure it was a 1981 Toyota Celica but not certain. Maybe not that exact model or year but the same area code. Her next car, a clearer memory, was a red Ford Festiva which she said, "looked like a Converse high-top."
One the ride home I was scared shitless as Twinkle was using the yellow line only as a vague reference point. We were in the North Carolina mountains 4100 feet in elevation where the roads are very curvy. Lots of sharp drop-offs with no guard rails. With audible exhale we reached my parents' driveway but I wasn't out of the woods yet. Ms. Quesenbury decided that it was imperative that she come in to say hello to my mother and father. Twinkle plopped sideways down in a cozy chair in the living room, legs over one armrest, back against the other. The only reasonable thing for me to do now was run and I made a B-line for my room. Much time passed. Twinkle eventually headed home (safely) and I was spared any parental wrath.
I'm told Ms. Queasenbury was more or less run off by the school for being "too radical for the academy" or for perhaps being gay or for simply not just grinding through the lesson plan. These were the Jesse Helms 80s. Luckily, I had the pleasure of being her student before the Macon Co. school system moved her along and have Twinkle to thank for being an early guide on a path in life that I very much relish. The following year, I scored an archtop guitar from the same secondhand music shop where the coveted Harmony was purchased - a 1968 Lake Placid blue Fender Coronado for $225 which I still own. Twinkle....if you're out there....
Posted by Reuben Cox at 2:17 PM No comments: