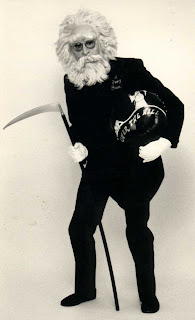 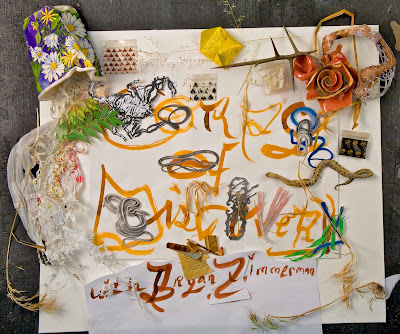 Corpse of Discovery with Bryan Zimmerman will perform this Saturday, July 10th at Old Style. 7:00 PM. Not to be missed. This, the third in an ongoing series of free events at Old Style, celebrates the release of Mr. Zimmerman's new disc. (Extremely) limited to 300 copies on vinyl, this record will soon be more valuable than your first pressing of Oar. A lavish production, the record jackets were silkscreened (marble-ink monoprints), letterpressed, and "oil-foil" stamped on uncoated chipboard. Bryan will also be handing out used phone cards found on NYC streets with a code for a free download of the record. A very rare West coast appearance.
Also performing alongside Zimmerman this Saturday will be Laura Ortman (who also performs with Bryan as The Dust Dive), Patrick McCarthy, and Travis Millard.
Corpse of Discovery was recorded and co-produced by Jason Loewenstein who is best known as a member of Sebadoh as well as Fiery Furnaces.
More info about C.o.D. HERE on the Free 103.9 website.
Posted by Reuben Cox at 4:41 PM No comments: 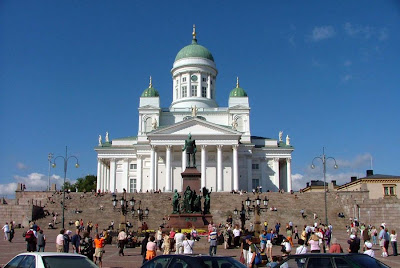 Helsinki Cathedral, Senate Square
This, to my knowledge, is the furthest point North one of my guitars has ventured. Senate Square in Helsinki, Finland. About 60 degrees North latitude. Almost as far North as Wasilla, Alaska. Fiddlesticks! To put things in perspective, New York City is at approximately the same latitude as Madrid or Rome.
Another handsome one-piece outfit on Mr. Parry and I love how much Win Butler's vocals sound like Neil Young. -Prob has something to to with the mic on the videographer's phone. I dunno.
Posted by Reuben Cox at 2:18 PM No comments: 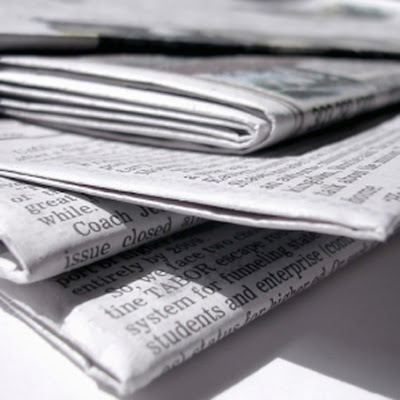 Not to be confused with silverdaddies.com (field tested and approved by a couple sexy seniors I know), urbandaddy.com has just posted a review of Old Style. Check it out!
Posted by Reuben Cox at 3:23 PM 1 comment:

Richard Reed Parry rocks it Old Style in a smart white jumpsuit and curly guitar cord!! This was my first guitar with black sharpie sides as a stock option! Arcade Fire's new LP (out early August) is entitled The Suburbs and I'll presume this free show in a shopping mall parking lot is in reference to the album's title.
No results when I entered "Longueuil" into a French-English online dictionary so I'll guess that it is a surname. Place Longueuil, a much more elegant name for a mall than most American shopping centers. I have a theory that housing developments and shopping malls are usually named for the former landscape features that were 'tamed' to make way for a Hot Topic, an Ann Taylor Loft, or clusters of duplexes on cul de sacs. Some American faves: Millcreek Mall, Sawgrass Mall, Woodfield Mall, Green Acres Mall, Oak Park Mall, Oakbrook Shopping Center, and Jordan Creek Town Center.
Looking forward to the new disc! It's gonna be Mall of America big!
Posted by Reuben Cox at 2:21 PM 1 comment:

The National Live! at Old Style 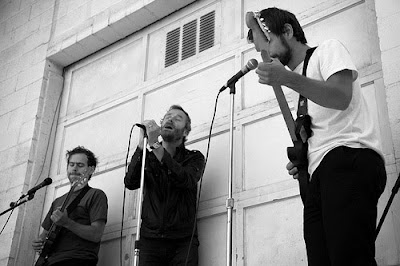 from farmer9999's flickr photostream
Sandwiched between two sold-out shows at The Wiltern, The National gave a special in-store performance at Old Style on Saturday, May 22 at noon. Some video here. A YouTube vid from Coreypet's iPhone here. More to follow. The performance took place in the alley next to Old Style which has a loading dock at the far end and made for a perfect approximation of a venue. The performance was announced several times on KCRW by Jason Bentley and Anne Litt and I went to bed the night before with thoughts of fatalities and lawsuits running through my mind. I think most either took it for a hoax or the Old Style blip has yet to appear on the municipal radar. Perhaps the latter. In the end, my wishes were granted and my ideal sized audience of about 40-50 National friends and fans showed up.
Matt, Bryce, Aaron, and Scott (Scott invoked his brother with the occasional tambourine or maracas accent) played a set of about six or seven songs to a slackjawed audience that couldn't believe they were seeing The National in such an intimate setting. -Just moments after releasing a top 5 record no less. The only thing missing was your surly uncle grilling burgers and putting out a grease fire with a spatula while he smokes a Pall Mall. Like an early Slint show, and as time passes, many will claim to have been there that actually weren't. It was a magical experience.
Posted by Reuben Cox at 7:56 AM No comments: 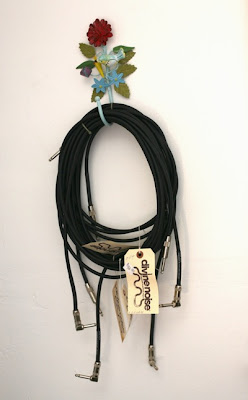 ...handmade guitar cables from Divine Noise est arrivee! (Well, don't forget the Beaujolais entirely. It was Duke Ellington's favorite wine, you know. ) Divine Noise cables are made one at a time, by hand, by Gil Divine in Portland, Oregon. Learn more about Gil in a post from March 8th. See and hear one in action here.
Old Style is the only retail outpost in the known world for Divine Noise cables and we're stocking them in 10, 15, and 20 foot lengths. Patch cables are also available. Mr. Divine builds his cables with silver solder and lots of love. They sound great and will last forever. Folks like Lucinda Willaims, Spoon, Yo La Tengo, Eric Bachmann, Jack White, and others use Divine Noise cables and now you can, too.
The echt kuhl Divine Noise logo was designed by amazing Scott Devendorf of The National. The band's brilliant new record, High Violet, hits stores on Tues, 11 May on 4AD.

Posted by Reuben Cox at 1:39 PM No comments: