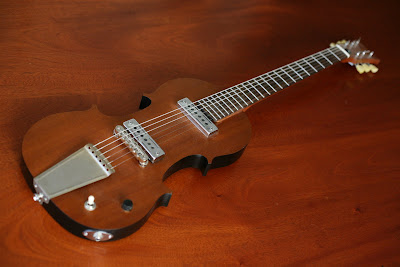 Eventually every double-neck Steinberger finds a loving home and this viola-shaped guitar will certainly find a good parent in due time. Built on spec last month from my last bit of mahogany from Rosenzweig Lumber (est. 1910) in the South Bronx. My all-time favorite lumberyard and located just four miles south-east of 1520 Sedgewick Avenue. (...and six and a half miles from the intersection of Ohm and Ampere Avenues!) Guitar has a hollow body with no f-holes and black lacquer under clear-coat on back and sides. Great-sounding 60s Teisco pickups which took much fussing with shims to get the output balanced between neck and bridge. Old, 1930s (??) tailpiece and Tune-O-Matic bridge. Mahogany and rosewood neck with the undeniably great Tonepros vintage repro tuners. Very lightweight.
Most, or all, violin-shaped guitars and basses are somewhat stylized in their design but the body shape here is taken directly from a Google images search for 'Viola' and scaled on a Xerox machine at Kinkos. I'll do a dual dedication to LA's Paisley Underground and my pal Dan, America's biggest Beatles fanatic!
Posted by Reuben Cox at 12:12 PM No comments: 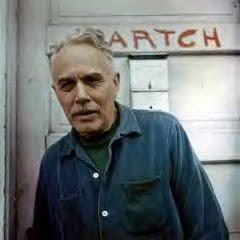 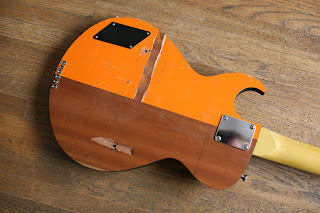 Two recent, similar, guitars. The top one was built for Sufjan Stevens and the bottom one, shown leaning against the amp, (and came first) made for Bryce Dessner of The National. The old-growth Western NC cherry wood was once a kitchen shelf in a cottage at Skywinding Farm in Scaly Mountain, North Carolina. Remarkable wood. Super dark and dense wood. Tap it and it sounds like porcelain. 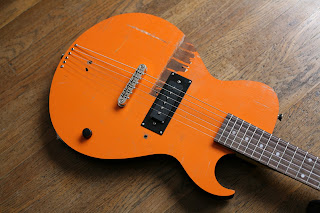 Before the orange paint was unleashed (looks like a coat of puce Sherwin Williams under there too) in the 60s or 70s, this cottage (for a summer in the 1950s) once housed the great, avant garde composer, Harry Partch. Partch was the guest of poet Jonathan Williams though I wonder how much composition could have been accomplished as Partch built a large fieldstone terrace above the main house which could have taken all or most of the summer. Whether the terrace was a thank you for room and board or he was hired by Williams' parents is unknown. One summer Williams, Thomas Meyer, and myself would often dine on the 'Partch terrace' and on occasion bring out a portable record player to listen to the original vinyl issues of his compositions while we dined! Harry Partch is the inventor/builder of many instruments including the Whang-Gun, the Quadrangularis Rerversum, Cloud Chamber Bowls, the Zymo-Xyl, and the Kitharas.
Whether or not Partch composed during his Scaly Mountain visit there was inspiration for a future composition. One Saturday evening that summer, Jonathan Williams brought Partch to the (Macon) county seat of Franklin to show him mountain clog dancing at the Courthouse square. As a result, Partch was inspired to compose Revelation in the Courthouse Park. 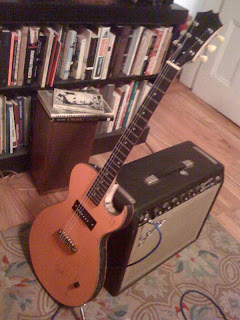 Anyway, I like to think that the cherry lumber (recycled from recent renovations to the cottage) soaked up lots of Harry Partch ju-ju. -Or he at least set a can of baked beans or tomato soup on the shelf. 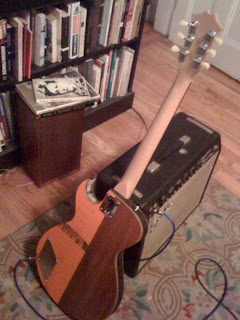 Both guitars are fitted with a single, Jason Lollar Chicago Steel pickup which is based on Oahu lap steel pickups from the 40s. It's built like an iceberg! Huge magnets lurk underneath. No other pickup sounds like it. I believe Lollar intends the pickup to be used in the bridge position but it sounds damn good in the middle position. Sharpie marker was used to color the sides of both and Sufjan's version is slightly smaller than Bryce's.
Bryce and his brother Aaron have been a tremendous help in the Old Style R&D department this year. More on the Dessners in a future post. Stay tuned.
Posted by Reuben Cox at 8:14 AM No comments: 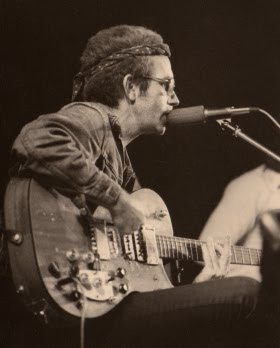 J.J. Cale's heavily customized Harmony flat top. Some amazing footage of the guitar can be seen in this youtube clip. Cale once remarked that tooling on guitars was his "golf" and this one seems to represent all 18 holes, well played, complete with water hazards, sand traps, and a flask of Cutty Sark. Certainly one of the funkiest guitars on the planet. A whole lot going on. In the video clip, Cale flips over the backless guitar and you can see the turnbuckles that hold it all together!
Cale on his Harmony, from the Gibson website:
It's pretty much inoperable now. The airlines messed it up pretty badly. That was one of the reasons I kept modifying it, or trying to fix it. In those days I didn't know as much about modifying guitars. I took the back off it, because an airline had crushed it. Also, it was an acoustic guitar, and we were starting to play bigger gigs, and I needed to play louder. This was before piezo pickups. When I put a magnetic pickup on it, I would get up to a certain volume level, and then it would feedback. In those days there wasn't a good way to prevent that. One reason I took the back off the guitar, and put a rod through it, was so it wouldn't generate feedback any more. (Full interview here)
Other implied guitars: any number of Eddie Van Halen's home made guitars , The Les Paul 'Log', and Brian May's 'Red Special' or 'Fireplace.'
Posted by Reuben Cox at 10:12 AM No comments: 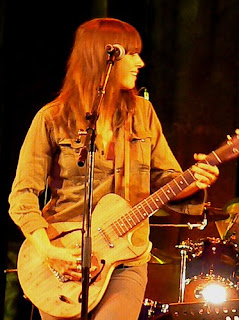 A favorite guitar from a couple years ago built for Chan Marshall who records as Cat Power. A youtube vid of the guitar in action here. On tour for "The Greatest" her famous black Danelectro was accidentally knocked over by a live sound engineer and the headstock cracked. A few months (weeks?? I dunno) before the Danelectro was busted, I dropped in at the Mercer Hotel in New York where Chan was dazzling the press corps. I brought along a guitar for her consideration but she wasn't too keen on its old Mustang neck and said she would much prefer a Silvertone neck. She had her Danelectro with her which I had the great pleasure of strumming a few chords on. Die Zauberflote! I thought, as it was Dreadnought-loud played unplugged! Very pleased to have one of my guitars in the mix but have fingers crossed for a rebirth of Chan's Danelectro.
The follow-up guitar, as it were, arrived a month or two later after I was able to hunt down a Silvertone neck which I'll guess to be a '59 or '60. As with Fender necks, Chan has an allergy for switches on guitars. So the two, early 60s, neck and middle position, lipstick tube pickups are wired with just a volume knob and no three way toggle. The original 250K potentiometer was later replaced with a 100K volume knob to remove some of the twang that you'll hear in the youtube video. 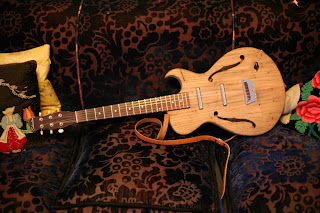 The body is made of wormy Chestnut and is light as a feather. Guitar has the feel of playing a cloud. The lumber had a former life as a bookshelf in the home of poets Jonathan Williams and Thomas Meyer in Scaly Mountain, North Carolina. The shelf was removed many years ago to reclaim some wall space for Williams' collection of modernist photography and am trying to remember what books were once shelved there. I have a dim memory of R.H. Blyth's four-part Haiku series, Aperture's Masters of Photography Series, Stephen King and Peter Straub first editions, others.
Finished guitar was delivered in a brown shopping bag from APC following the inspiration of seeing a photograph of The Ramones with Joey Ramone's Mosrite in a shopping bag in lieu of a case. Band looking sharp on the G train probably headed into the city for a gig at CBGB's. Transfer at Queens Plaza for the R train into Manhattan??
Posted by Reuben Cox at 2:59 PM 1 comment: 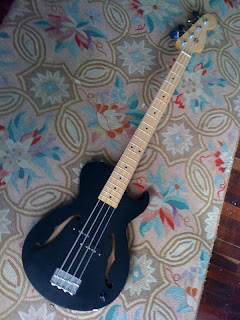 First bass built in the standard Old Style style. Fender bird's eye maple neck, P-bass pickup by Lindy Fralin and my stock of cherry wood never seems to dry up so book matched cherry top and back. Light and resonant. No bass amp in the Old Style test kitchen, just my old Fender Princeton, so I will have to hunt one down for R&D. Mark Ohe, famous art director/graphic designer and bassist for Endless Boogie was over a couple days ago and suggested the action be lowered a bit so I lowered it.
Endless Boogie played last night at Avalon in the shadow of the Capitol Records HQ on Hollywood and Vine. Jesper Eklow, EB guitarist, took this guitar out for an airing. The guitar came together earlier this year at my gallerist's eastern Pennsylvania home. I set up a plywood and saw horse table in front of her 18th century barn over Memorial Day weekend. Note the guitar's combined POW/MIA and PA Dutch vibe. Late 60s Danelectro/Coral neck, 19th century mahogany body, Lollar P-90. Sumi ink and wax finish.
Posted by Reuben Cox at 9:58 AM 1 comment: 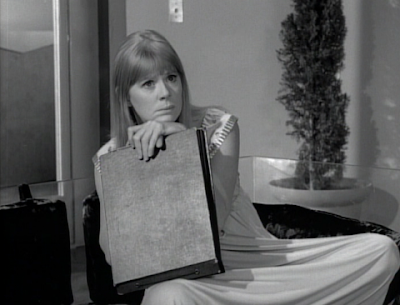 Collin Wilcox Paxton, stage, film, and television actress died on October 13 at her home in Highlands, North Carolina. She was 74.
Best remembered for her role in the film adaptation of To Kill a Mockingbird as Mayella Violet Ewell, she also had a long and successful Broadway career. (Her IMDB page here) I know her as the founder of a number of non-profit arts organizations such as The Studio for the Arts and The Highlands Cashiers Players in Highlands, NC. The Studio for the Arts occupied a former forest service garage downtown and students from Highlands School would be bussed to 'The Studio' for classes in visual arts, acting, and dance.
My earliest recollection of a class at The Studio would have to be about second or third grade, when I was guided through the drafting of a black and white bunny in pastel. The instructor was Elsa Sibley, a tall and wiry artist and horse enthusiast (and dead ringer for Patti Smith) and I remember very clearly Sibley introducing the class to the work of Toulouse-Lautrec.
I last saw Collin in June when she hosted a cocktail party following the launch of my log cabin book. She gave me a copy of, "Boyhood Photos of J.-H. Lartigue" (Ami Guichard, Pub., 1966) that had been given to her by Tony Walton, Tony award winning scene designer and former spouse to Julie Andrews. As a remembrance, I will look forward to passing the book along to someone interesting in 2045! Of the kindest, most generous, and interesting folks I have ever known. She will be sorely missed.
Posted by Reuben Cox at 9:10 AM No comments: