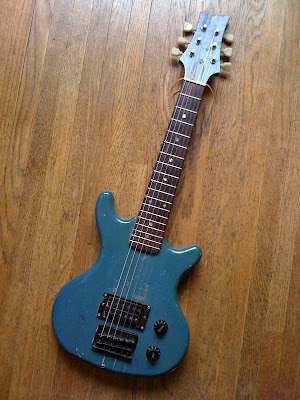 Short-scale homemade octave guitar in stunning Makita blue. From the Mark Ramos-Nishita collection. A gift from (and presumably made by) a fan which was presented to Mark after a show. This guitar makes me chuckle. PRS-esque headstock, DiMarzio (da-mazzio if you're from Queens) humbucker, and string-through hardtail Strat bridge. Three-piece maple neck-through construction. The pickup was rattling around freely in its cavity and that was addressed. I should probably replace the pickup mounting ring but was moved to keep it as original as possible. Any major alterations might be regrettable, like when I cut the legs off that Chippendale highboy to fit it in the bedroom. I thought Leslie Keno was going to beat me with a broom handle for that one.
With the pickup back where it belonged, I gave the guitar a new set of strings and the intonation got a nudge. Plugged it in and it sounded pretty damn good! I would recommend this one for the shorter guitarist as it will make you appear considerably bigger on stage. Coupled with a pair of Prince's stiletto heels, all eyes will now be on you!
Posted by Reuben Cox at 10:42 AM No comments: 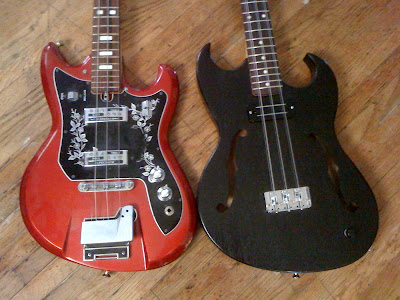 A genius idea shared with me (and invented by) by the peerless Mark Ramos-Nishita (AKA Money Mark). On the left is his 60s Teisco which he converted to an electric version of a Tres Cubano. Wouldn't have been the same if he'd chosen a Swedish Hagstrom guitar to Latinize. A Japanese manufactured Teisco seems to make more sense for this particular mash-up. Mark, I believe, first recorded with the Guittres on his record, Push the Button. Traditional tuning is G, C, E, but Mark likes his G, B, E. 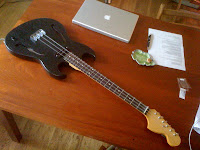 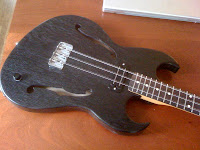 My version began by placing Mark's guittres on a piece of kraft paper and tracing the body. No laser-holographic imaging of any kind was employed for this first, crucial step. I have been living in Los Angeles for four months now and am beginning to acclimate to my architectural surroundings so rift-sawn oak was chosen for a Craftsman-style Gustav Stickley vibe. The wood was dyed black with Sumi ink for a touch of the mystic east. The pickup is a Bill Lawrence 560 mini-humbucker from the 1970s.
$Mark is often referred to as the "fourth Pep Boy" and is currently dazzling audiences on tour with Harper Simon.
Posted by Reuben Cox at 9:55 AM No comments: