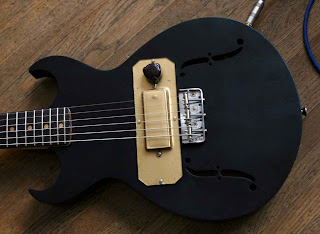 Pickup found recently on.......perhaps you've heard of it.......eBay. I'll take a stab and say early or mid 1950s. Vacuum molded lucite cover backpainted gold. Surprised there is not a tone knob on the bass side which seems a bit odd. Seven digit potentiometer code wasn't recognized by the Guitar Dater Project, odd as well. Let me know if this pickup looks familiar to you. The coil is P-90-esque in its construction and sounds, er, golden. The neck is from a 1962 Fender Duo Sonic with original Klusons. Chopped Telecaster string-thru bridge which, for a couple months last winter, I thought was an invention of my own. -But nothing new under the sun as the saying goes. Tra la. Double-cutaway cherry wood (poplar sides) body is hollow with Dobro-homage mini F-holes. Strung with .13 gauge roundwounds for extra whomp. Action is set up to follow the contour of the neck radius but the bridge could be adjusted to a flatter radius for a slide player.
This 3/4 scale guitar reminds me of John Lennon's 1958 Rickenbacker 325 during the period that it was painted black. That guitar has an even shorter scale, 20.7". Nearly five inches shorter than a Telecaster! 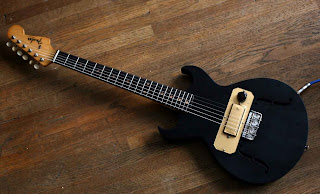 Posted by Reuben Cox at 8:10 PM No comments: 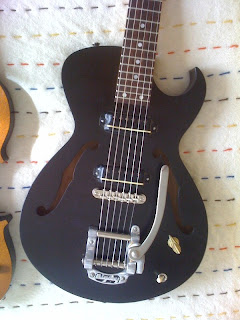 Finished guitar with the 1953 Premier pickups mentioned in a previous posting. 70s (poss. earlier) Bigsby B-5, Tune-O-Matic bridge, Warmoth maple/rosewood neck, original (and rare) white Daka-Ware pointer knob, Klusons. Like all the other guitars from the past several months the control plate is 40s Melamine recycled from dark-slides from cut film holders for large-format view cameras. You might remember Melamine as the material that bowling alley ashtrays are made of. Nasty stuff. The body is book-matched cherrywood with poplar neck and bridge blocks. Sumi ink finish with a thin lacquer clear-coat.
Pickups were pretty fussy to mount as the plastic covers have shifted a bit over the decades. Pickups were originally for a guitar with a much more acute neck angle than this which made a 1/8" poplar shim under the neck pickup (like on the bridge pickup of Scotty Moore's ES 295) necessary.
Expectations are best kept low with wild card pickups like these but they sound pretty fantastic. Low output by today's standards but with such a great warm and open tone. Pickups are fairly microphonic but no biggie. The temptation was there for wax potting but thought it might be like throwing water on the wicked witch of the West with a cloud of magenta smoke the only thing to remember them by. 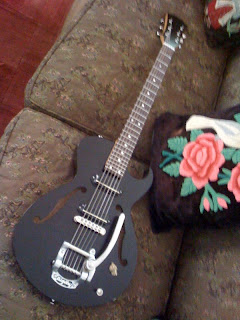 Posted by Reuben Cox at 4:17 PM No comments: 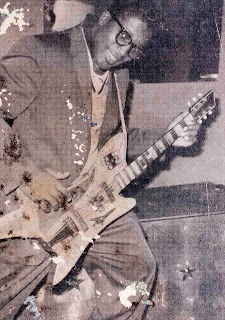 The Originator, Bo Diddley profiling with futuristic, tail-fin/jet-age guitar sometime in the 50s. Supro neck with Gumby headstock and white button Klusons, two DeArmond Stratotone single-coils in the neck and middle positions, rosewood bridge and a very old tailpiece probably from an ancient mail order flat-top acoustic. I'm barely making out tone and volume knobs on the upper horn and a pickup switch could be lurking in there somewhere. I dunno? Jet silhouette painted below pickups and are those sequins up top?!! Not sure if any color photographs exist of this guitar but I'm going to guess white with red airplane, etc. And check out that 8x10 cabinet in the background! -Wonder what he had powering that beast? Rock N Roll take on the Heisman Trophy pose, new suit, stylish V-neck sweater, and great hair. The whole package.
One of my all time favorites after the primordial electric solidbody built by Paul Bigsby in 1947 for Merle Travis. Not quite sure where this modified Stratocaster (http://members.tripod.com/~Originator_2/images2/guitar3.jpg) with built-in drum machine fits into the mix but it's clear to me that it never traveled as carry-on baggage. Viva Bo. 30 December 1928 - 2 June 2008
Posted by Reuben Cox at 8:21 AM 1 comment: 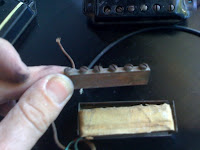 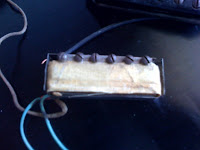 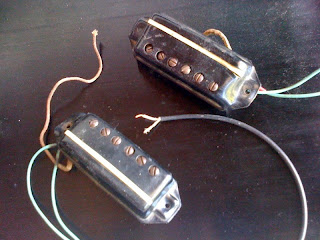 Multivox Premier (???) single coils from the 33 week (mid-August) of 1953 according to the 6 digit code on the Clarostat volume and tone pots. Same summer that Elvis went to Memphis Recording Service to record "My Happiness" and "That's When Your Heartaches Begin." "Rocket 88" was two years old when these came into being and in two years Little Richard would begin recording his great records for Specialty. The Les Paul guitar was one year old.
Similar to the leaky vital organs of my old Ford pick-up truck, these pickups seem to be holding together by sheer will but function fine. A guitar is in the works for these so I am hoping they will hold together a short while longer. Took them apart a bit, but not too much, as I fear they're going to turn to dust like the frescoes in Fellini's "Roma" found via the subway tunnel construction which vanish when exposed to the outside air.
Each pickup has two magnets. The first has a coil wrapped around it and is covered in the type of Johnson and Johnson tape that you would wrap a sprained ankle with. This magnet is not attached (by tape or mechanically) to the coil. The second magnet (like the first, it is just sandwiched in there) has height adjustable screws built in and forms a sort of "T" shape with the other magnet. The whole works sits in a galvanized steel "cup" that was formed out of sheet-stock. Fairly crude so am wondering if it is original or not. Both pickups weigh in just under 6K ohms. If they can handle a bit more jostling I will be very excited to hear how they sound.
Guitar pickups are of the most simple, mysterious, and interesting devices that I know of. Perhaps coming in a close second after a radio receiving a broadcast or electricity passing through wires powering my Cuisinart. Copper wire is wrapped around a magnet and is placed in close proximity to a vibrating string at tension. Literally millions of electric guitar sounds/tones exist and are all delivered by variations of this simple device. Oramus!
Posted by Reuben Cox at 4:53 PM 1 comment: 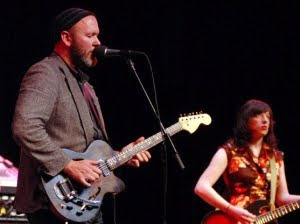 Guitar built for amazing Eric Bachmann in, me thinks, 1997. In the background that's Miranda Brown, another golden throat. Photo is from a 2009 tour and here's a vintage video (VHS??) from olden tymes of the guitar in action in the mid-west: http://www.youtube.com/watch?v=-cyciy9UV0g&feature=PlayList&p=C93B556C1533F10F&playnext=1&playnext_from=PL&index=25
Guitar is made of cherrywood which was given to me by Leon "Deadeye" Potts of Highlands, NC and was harvested near Bryson City, NC. When I was running the wood through the planer I found several specs of lead buckshot; presumably where some hunter was shootin' at some food. The neck is a CBS-style Stratocaster built in Canada by Brian Monte (Monty?) bought at Mojo Guitars on St. Mark's way back when. Brian, if you're out there, give me a call. Bigsby came from Matt Umanav Guitars and the pickups came from a couple blocks away from the compelling and creepy Music Inn. They're 50s or 60s DeArmond Dynasonics that they found after fumbling around the shop. I asked if they had any interesting pickups for sale and a drawer was pulled out, several fistfulls of plastic bags were cast aside, a medium-sized piece of Ivory ("You didn't see that") was found, and then the ratty DeArmond box was produced. $95 with wiring harness!
One of the owners of Music Inn was the go to guy in the 60s if you wanted to learn enough sitar to get your Norwegian Wood on. My brother took some lessons from him when he was doing his residency at Bellevue. I would often see him waiting for the bus at 9th st and Second Ave and I used to see his partner at the Chelsea flea market buying a beat up French horn or some bizarre oceanic instrument.
Eric's guitar has aged amazingly well considering the caustic sweat that drips from his body. -Was rewired and restored by Gil Divine a couple years ago (he said he found a grocery list written in pencil inside the control panel, hmm) and sounds better than ever. Perhaps this is the guitar that sired Emo. Quien sabe?? Eric is currently in Taiwan teaching English and recording new songs. We're all waiting for an Archers reunion but "Your Control" off his most recent record boggles the mind. One of America's great greats. Don't be a fizz, buy the records.
Posted by Reuben Cox at 10:42 AM No comments: 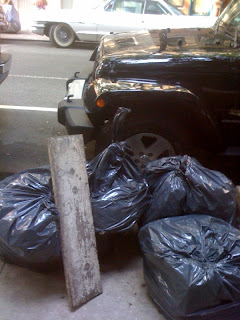 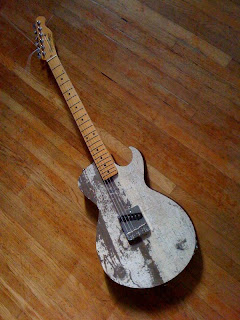 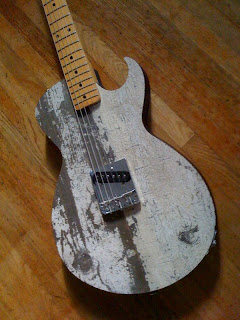 Pine plank found on either E. 10th or St. Mark's earlier this summer. Can't remember but I do remember the traffic flow being east. Final few days in NYC before following the golden rays of the setting sun west to LA. Almost passed this board up but the white Cadillac across the street and the weathered white board, etc, etc. Smelled great when I split it on the table saw for book-matching so it's certainly very old pine.
The back is recycled maple from a a 60s piece of Salvation Army furniture and the sides, neck, and bridge block are poplar. Sharpie finish on the back and sides! '83 Bullet neck in honor of Junior Brown and a Lindy Fralin Telecaster pickup. No tone or volume controls.
Posted by Reuben Cox at 5:45 PM No comments: