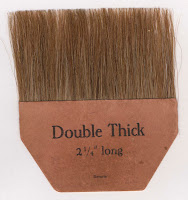 There's Max Hyder's gilder's tip which was given to me by the sculptor, Richard Knox. Max taught me the intracacies of gilding at The Cooper Union in the early 90s. Mr. Hyder is also a dead-ringer for late Walt Whitman and legendary raconteur who also helmed the Cooper Union sculpture shop. Imagine being a pea-green art school freshman beavering away at a band saw and Walt Whitman in overalls appears out of your blind spot, exclaiming, "I want to lick your balls!" Lewd but not lecherous, maybe it was the delivery, and "too much for Chinese television" as my pal Jonathan liked to say. The CU sculpture shop was legendary for its holiday and end of year parties. Mr. Hyder lured many an art-school boy into the privacy (not that privacy was all that crucial) of a welding booth. Another sculptor (and CU faculty), Ersy Schwartz, annexed the wax room to build a kitchen complete with a Chambers stove. This ensured the parties were well catered. 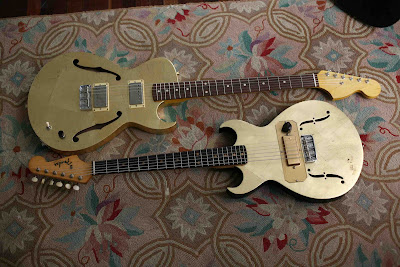 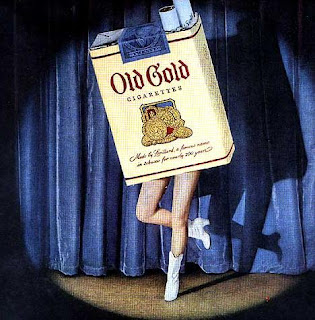 Anyhoo, one new and one revised guitar that were gilt. The short scale guitar is a refin and appears in a previous post. The f-holes (easy Max) can be better seen now and the gold looks good paired with the lap-steel pickup. The other, standard scale, guitar is equipped with a 70s, dec0-style, Stratocaster neck and a pair of Jason Lollar Imperial Humbuckers. Chopped Tele bridge and hollow, cherrywood body. -So the guitar is a mash-up of a Stratocaster, Telecaster, Gibson 335, and a Les Paul. Blissfully light! All the praise for Lollar pickups is true by my experience! 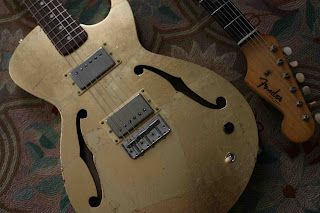 The humbucker guitar is currently on loan with Paul Banks' alter ego, Julian Plenti, who has been giving it a test drive. The other gold guitar is down in the basement, playing video games, being a general layabout, wastrel, and profligate. 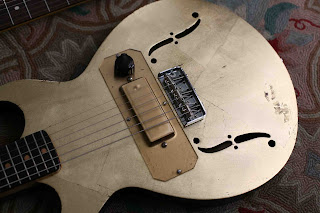 Above the Paving Stones - the Beach! Pia Dehne, Gentle Situationist 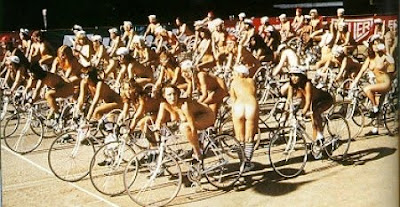 ...from the archives:
On October 13, 1978, rock behemoth Queen released the double A-side: “Bicycle Race” b/w “Fat Bottomed Girls” from their new LP, Jazz, which would appear in record stores the following month. As a publicity stunt, and in the spirit of the band’s propensity for all things decadent, a nude bicycle race was orchestrated. Sixty-five women rode sporty white touring bikes rented from the British cycle shop, Halfords. In addition to these shiny new ten-speeds, each rider was provided with a pair of black leather shoes and white ankle socks. Approximately half wore white cotton cycling hats and three women wore red hats. (The riders look suspiciously tanned for English women.) Examining the (in)famous photograph from the race, it doesn’t appear to be a rock’n’roll party atmosphere at all; the racers have their game-face on and are poised to compete. The photograph documents the beginning of the race, presumably the moment before the starting pistol was fired. All of the women sit astride their bicycles in the ready position with two exceptions: one woman takes a sip from a water bottle while another stands with her back to the camera to reveal, yup, a fat bottom. The rentals department at Halfords was so shocked by the use of their bicycles they insisted Queen purchase all sixty-five seats! Where are those seats today? I imagine an unlucky EMI intern spent a couple hours with a crescent wrench replacing the sullied seats, pining the likelihood of ever meeting the band members.

The queens of Queen are a bit puzzling. On the one hand you have the lyric, “Fat bottomed girls, they’ll be riding today” –from “Bicycle Race”- and the fist-pumping stadium songs “We Will Rock You” and “We are the Champions.” On the other hand, you have those harlequin tights and the Excalibur-sword half mic-stand. Thus, when Freddie’s mind-bending operatic tenor belts out “Bicycle! Bicycle!” it is easy enough to mentally replace it with “bisexual.” Yet, how many mid-western high school basketball teams in the 70’s and 80’s exploded onto the court for warm-ups to the tune of “We Will Rock You”? Hundreds. And how many of them knew that Freddie was, like, gay? Not many. So…OK…jock straps…locker rooms…it’s beginning to make a little sense. The male fantasy of sixty-five girls in a bike race filmed in a lo-fi Leni Reifenstahl style. Check it out on You Tube, folks. Perhaps I’m thinking too much which is decidedly un-rock and a flotilla of naked women (or men) is a perfectly pleasant idea – gay or straight. Which brings me to the matter at hand.

Pia Dehne has staged a tableau vivant of the Queen bicycle race as a neo-happening and inspiration for a series of paintings and drawings. This isn’t the first time she has staged such a scene. For her previous Deitch Projects show in the spring of 2004, Dehne recreated the original UK cover for Jimi Hendrix’s Electric Ladyland, using a collection of New York artists and musicians as models. An eighteen-foot painting on black velvet was made from the photographed event. (To my knowledge, Dehne is neither a pot-smoker nor does she own a blacklight.) This “monumental velvet” sat as the centerpiece of the show and was flanked by sketches, small paintings, and other source materials as tributaries leading up to the large painting. For the new work she has inverted the process by using her carefully staged and photographed re-creation of the bicycle race as her port of disembarkation. I find this new work to be a vast improvement upon her previous solo show at Deitch. Dehne views her tableau through her own secret prism, abstracting and molding her source material.

For the re-creation of the bicycle race, Dehne’s riders were not naked. A “nude-suit” (a Queen-sized oxymoron) was pieced together with two pairs of sheer stockings; the first pair was worn normally with a flesh-toned g-string underneath and the second pair’s legs were made into sleeves with the feet of the stockings cut off to free the hands and the crotch was cut out for the cyclist’s head. Other accessories, as described above, such as hats and shoes, were faithfully reproduced. Prosthetic breasts functioned as oversized pasties and were held in place by the upper pair of stockings.

Pia Dehne is a social dynamo. She can be seen at almost as many New York City art events as that older gentleman with the gray mustache and crazy Monchichi hair. (Don’t pretend you don’t know whom I’m talking about.) She has no trouble assembling a group such as this, as all of the participants are personal friends of hers.

The event took place September 9th, 2006 as a part of Jeffrey Deitch’s 2nd annual art parade. Each participant was assigned a number corresponding to a cyclist from the original photograph in order to more closely replicate the prototype. The women (see if you can spot the one in drag) met before the parade at Sara Delano Roosevelt Park near Stanton and Chrystie Streets for the photo session. A crowd of gawkers quickly assembled and got in touch with their inner hard hat. A group of men playing soccer on the adjacent field showed more hustle than usual. One of the footballers paused to view the spectacle through a chain link fence. After the session the cyclists relocated to West Broadway and Houston streets to lead off the art parade. The short parade route covered only a few blocks to the Deitch space on Wooster Street and, apparently this brief ride wasn’t enough for the emboldened cyclists. Feeling a strong sense of unity and empowerment, Dehne’s cyclists continued en masse on a random route through SoHo for another thirty minutes, turning heads and stopping traffic. Cabbies forgot about their lower back pain for a moment. Shoe shoppers at Camper noticed nothing. The rented bicycles were returned without incident, seats and all.

Simplicity and purity are difficult to achieve in any medium, especially with the subject matter Dehne has chosen. Work such as this is often accompanied with a didactic whomp on the head. I’ve emerged with no unusual aches or pains and feel pleasantly enlightened. Perhaps the most poetic aspect of this work is what Dehne did not do – at least actively. Her cyclists were not instructed to deviate from the defined route, slow pace, and art savvy audience along the parade route and break away to redefine the parade on their own terms. A corny metaphor, sure, but illustrative of the humanistic and utopian aspirations of the work - sentiments that seem to limp along in obscurity in contemporary art practice. As Diana Vreeland once said, “The only thing worse than bad taste is no taste.” Play this record backwards and you will hear Pia Dehne summoning you to, “Form some opinions, your happiness depends upon it!”

“The Bicycle Wheel is my first readymade, so much so that at first it wasn’t even called a readymade. It still had little to do with the idea of the readymade. Rather it had more to do with the idea of chance. In a way, it was simply letting things go by themselves and having a sort of created atmosphere in a studio, an apartment where you live. Probably, to help your ideas come out of your head. To set the wheel turning was very soothing, very comforting, a sort of opening of avenues on other things than material life of every day. I liked the idea of having a bicycle wheel in my studio. I enjoyed looking at it, just as I enjoyed looking at the flames dancing in a fireplace. It was like having a fireplace in my studio, the movement of the wheel reminded me of the movement of flames.”
Posted by Reuben Cox at 11:46 AM 1 comment: